Welcome to the Wiki[]

Welcome to the Tales From My D&D Campaign (TDDC) wiki. We’re a collaborative community website about the youtube series and the Dungeons and Dragons game which the videos retell - a site which anyone, including you, can edit!

Click the edit button at the top of any page (or create a new page) to get started!

NB: If you're performing a particularly big edit, there is a risk of "edit clash", in which somebody else edits the page while you're in the middle of editing it, potentially ruining all of your hard work. To prevent this, please use the "work in progress" banner to alert other users not to edit the page.

The first episode of TDDC hit the internet December 2, 2012 with Episode 1: The Seeds of Adventure (you might see a different date in the playlist, because Episode 1 is the only episode to have been "remastered" and re-released). That first video was watched by literally dozens of people... Once Quill18 - a real youtuber - tweeted about it...

At that time, the D&D campaign had been running for several years, and Demonac's plan was to cover multiple sessions per 10-15 minute episode until getting caught up, after which it would become a weekly recap. That thoroughly did not happen.

In addition to LittleOne and Angel's players, and the players of a couple characters (such as Zaheer or Krillidin) who join later, none of whom are public internet figures at this time, the table is rounded out by:

Black, played by Briarstone - youtube.com/Briarstoned A hilarious streamer whose love of hard-mode and roguelike games of many genres makes him a community favorite.

All player characters (and all other characters) are voiced by Demonac, except for select female NPCs voiced by Demonac's sister, Orestria (@Orestria) - characters who are important enough to be worth the effort, but don't have so many lines that it would bog down Demonac's otherwise one-man-show production. In fact, although the earliest episodes of TDDC incorporated art from official D&D books and license-free art, since episode 8 that has been gradually phased out, until now all "art", "animation" and "music" is produced by Demonac. Who is also the GM, the creator of the setting, and the scriptwriter of the adaptation that is Tales From My D&D Campaign.

Under a new system, users can now nominate articles they believe should be merged into larger articles by adding this template. A full list of articles nominated for merging can be found here. 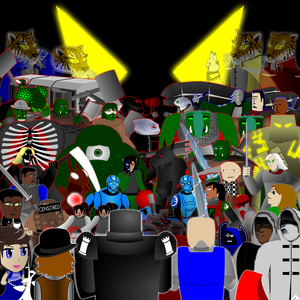 Did you know there's a TV Tropes page for TDDC?[]

Community content is available under CC-BY-SA unless otherwise noted.
Advertisement